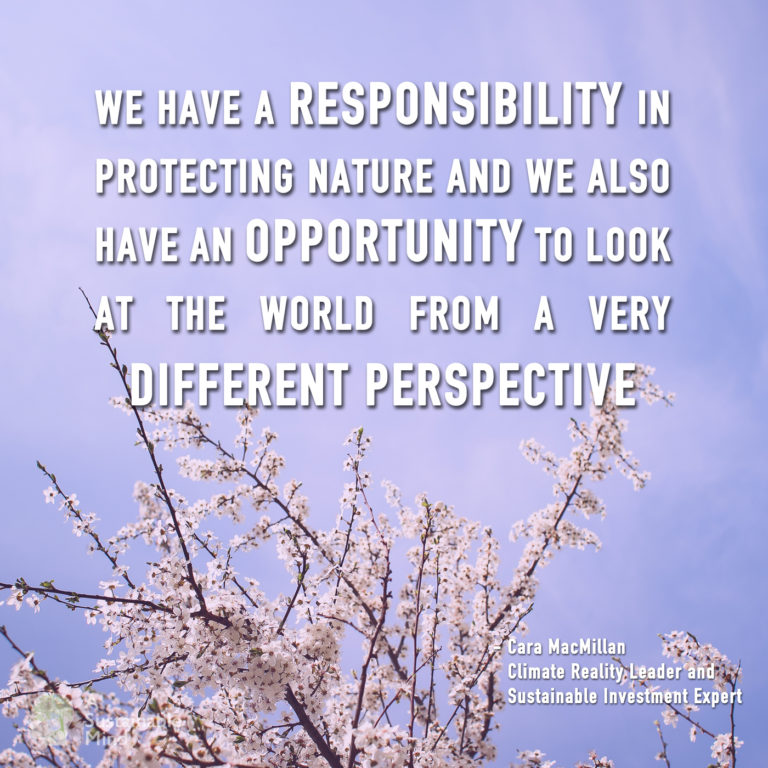 Cara’s interview with Marjorie Alexander of A Sustainable Mind

Posted on October 5, 2016 by caramacmillan

Carbon tax is an opportunity to level the playing field.

The problem is when we see the word TAX, we have a visceral reaction to it and why not? Honestly paying taxes is frustrating, and expensive. So often we do not feel that we are getting our money’s worth. The issue of Taxes is not the topic for today.

Carbon is the topic today.

2016 is the warmest year on record thus far. We have seen record extremes in weather. Oil prices are ridiculously low – how can this be a good thing for our earth? Well to be honest it is the best thing that could happen. Rather than adding a tax to the price of carbon, oil prices have made it unprofitable to harvest from the tar sands and other areas that have carbon intensive extraction processes. So the oil stays in the earth. That’s a good thing.

For many years, socially responsible investors have been demanding a balance of our energy needs. We have asked that our grids go green – nuclear, wind, solar and hydro electricity are all earth stewardship alternatives….I saw that! Ok for the purists of corporate social responsibility, you just screamed, “No nuclear never!” Nuclear is an expensive and risky alternative but for today it is safer than fossil fuels.  Many countries have a very green grid. Canada included. The focus on many countries is to reduce the production of fossil fuels.

The challenge is that to move away from fossil fuels loses MANY jobs; both in fossil fuel extraction and in their subsequent support infrastructure.

So what is the answer?

A tax that becomes a neutral revenue tax. Like tobacco, if you smoke, you pay an exorbitant amount of tax to support the healthcare costs associated with your decision.

So if you choose to use carbon, you pay a tax for the costs and consequences to our world for your choice.

A carbon tax can help develop new industry and jobs in the economies that were carbon intensive. Rather than fight against it, negotiate now to ensure that all people and economies will have a way forward.

Posted on September 30, 2016 by caramacmillan

The Pickering Nuclear Power Facility near Toronto Canada was built in 1966. Yes it is well maintained. Yes there is tremendous investment in safety. Yes the people who work at the facility are dedicated. Let’s talk real costs. Yes that is what we mean when we discuss responsible investment. But it still is almost fifty years old. Are the standards of 1966 sufficient in today’s extreme weather?

There are many ways to hide real costs in our democratic economy. The first is subsidies. What is a subsidy? A subsidy is a form of support to an economic sector or business to promote or give it an advantage. The energy sector is one area that has many subsidies of which many consumers and investors are not aware.

This increase will be phased in over a three year period.

Think about the greater Toronto area. It is referred to as the Golden Horseshoe are of southwestern Ontario. It includes approximately 8 million people and 20% of Canada’s GDP or more than a third of a trillion dollars. There are aging nuclear facilities within the GTA. The problem as activists see it is not that they are in any way mismanaged, the problem is that they are not built to meet the standards of today’s extreme weather.  The Fukishima nuclear disaster in Japan, 2011 was the direct result of climate change. Yes I said it. Those two words; climate change, that people and institutions argue vehemently over as to its existence. But it does exist. The standards to which the Fukishima was built were very high. It was built to withstand earthquakes and tsunamis. But no one anticipated an earthquake of 9.0. Research here varies. There was no transparency in the extent of the standard or the damage. As late as 2013, it was reported that radioactive water was still leaking into the Pacific Ocean.

So let’s think about the risk of another nuclear disaster right here in our own backyard.Is $1 Billion liability insurance enough?Well assuming a nuclear accident affects everyone of the 8 million in the area, it would translate to $125 per person.

Oh well, I am sure that our personal insurance will cover the rest since our homes will be uninhabitable…Check your policy – many home insurance policies do not cover nuclear accidents or disasters.

So do you want to invest in or consume nuclear produced electricity?

My friends in the GTA  and everyone who lives within a potentially radioactive radius of a nuclear reactor are worth more. Are yours?

Yours in Corporate Social Responsibility,

Beside every powerful person

Posted on September 28, 2016 by caramacmillan 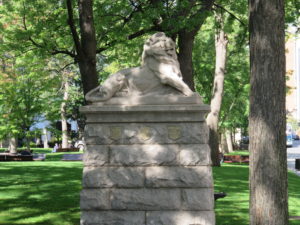 Thank you tribute to the Reign of a woman

A true partner walks beside you.

This post will be a little different. In keeping with my commitment to the values of respect and appreciation, it took me a bit of time to find the right words. So here goes…

There is an old saying: “Behind every powerful man is a powerful woman”.

But on Monday night, we had the privilege of witnessing the truth.

Beside every powerful person is a partner.

Bill, you stood beside your wife and daughter. You were gracious. You showed the world that you see women as truly equal. You campaign for your life partner as she did for you. You beam at your daughter’s grace, poise and confidence. You look into the eye of every person who spoke to you after the debate. You smiled. You showed respect.

As one person and many media tried to make this about a wife and their own perceptions of where a woman should be…you never faltered. You remain her partner. The commitment to your partnership is awe-inspiring. Together you have forgiven each other, grown together and remained steadfast in your commitment to making your country better and each other better. You have grown in interdependence when others chose to walk away from their commitments.

I think that it is time that we stop talking about gender and racism in this election campaign. I think it is time we again speak about respect, commitment and gratitude.

Stand tall my friends to the South, and for all the partners who stand side by side, thank you. Slowly, our world will evolve to be one where we do not label each other but we see the good in each other.

…and thank you Dave, for teaching me that I am worthy of being your partner.

Posted in Inspiration | Tagged Hope, leadership | Comments Off on Beside every powerful person

Posted on September 25, 2016 by caramacmillan

The first step in evaluating a sustainable investment is to determine if the company makes money. Last year, The Honest Company is reported to have $275M as per Bloomberg.

It is not just the revenues – it is the incredible growth which this company has enjoyed since it was founded in 2011.

So it is now valued at $1B – the price a larger company is prepared to pay to purchase and further develop the brand. The Honest Company is a success story. It believes in transparency and honesty. The guiding principles of this company are:

In the challenging eCommerce world, The Honest Company has built and a brand and products that keep people coming back. The operational challenges of ecommerce, distribution, marketing, delivery, packaging and consistency have been met with creativity and integrity. The brand of The Honest Company is worth the evaluation of $1B.

Their commitment to Social Responsibility is threefold:

And so to all the naysayers that believe there is no financial gain to making a big difference – Unilever begs to differ and rumour had it they are paying 3x earnings to prove it.

Will this success story inspire you to build your social enterprise?